After spending the day on Thursday at the new local Outlet stores, where we bought more t-shirts and new Levi  jeans for Owl. We had spent the evening ten pin bowling with Missy M and Mr T.(We played three games which were won in turn by Owl, myself and Missy M) then on to the diner where once again the portions were so huge that Missy M and Mr T took the remains of their meals home with them.

Friday was to be our second attempt to visit the vineyards. Out came the maps again. The plan this time was to drive north along the 101 to Windsor where we turned off west on to a side road. We followed a lane that headed back in a southerly direction before turning west, crossing the river. We were somewhat perplexed as to why a major river in the west of California would have the name ‘Russian River’. We had followed its course on and off during our day in the Redwood Valley.

Anyway once we had crossed the river our route began to take us back in a northerly direction again. With my copy of Wine Road northern Sonoma County map in hand. Each winery is listed along the road. We decided not to just stop at the first winery we came to. We would be selective. Driving along the lane to the left of the river under a canopy of trees with flashes of sun filtering through we were rather astonished to find a Ford Deuce Coupe coming in the opposite direction. No sooner had we commented on it than we saw a rather nice looking Chevrolet Corvette Coupe following in its wake. Soon we passing the first couple of wineries, the sun was high and hot, our stomachs were beginning to feel the effects of not having breakfast (I had had a cereal bar) so we pulled in to Thomas George Estate in the hope that not only would there be wine but also something to eat.

The sign said wine tasting in the tunnels. So we parked up ready to find out what it was all about. Just as we were walking away from the mustang (which we had been travelling in with the roof down (as you do on a hot sunny day in California). The Ford Deuce Coupe that we had passed going in the opposite direction pulled up next to us.

It was in great condition, Owl had a few words with the owners (as he does). The blow me down another car comes into the car park and guess what it was only the Corvette we had also seen earlier.

It seems that the two couples were travelling together.

We wandered inside the open door of the first tunnel, admired all the barrels and bottles. Strolling along one of the tunnels we were joined by one of the staff who talked to us about the estate and the wines they make there. He was a very interesting man to talk to. However now more than a month later I have forgotten most of what he told us. Next we took a stroll around the grounds close to the  main buildings. 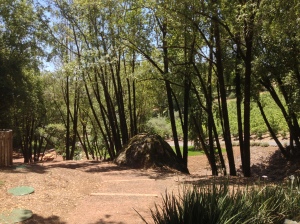 looking down from the car park. 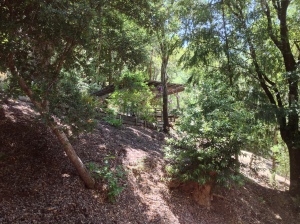 looking up towards a seating area.

Anyone for a game of petanque?

It was getting hotter by the minute almost so we set off in search of lunch. None of the other wineries on our route were showing any sign that there might be any food. I don’t understand why establishments asking you to try their wine, don’t also provide if required any food to soak up the alcohol. (even snacks or bread sticks??). I personally wouldn’t try any of the wine because of this. Even though I wasn’t driving I wouldn’t drink on an empty stomach.

Eventually we found a store and cafe at the entrance to one of the winery estates. It absolutely packed, both inside and out. Owl bought some bottled water and some bread.

Now we thought we would (ok so I thought we would and Owl agreed) drive to lake Sonoma. Only we didn’t realise looking at the map that the road leading to the lake didn’t go downhill as we expected but up. It went up up and still up until eventually we came across a steep turning that immediately ran back down hill. It was a long way down and steep all the way. We had been going down hill quite fast with a 4 x 4 right behind us, when we came across a car park on our left. We continued down a little further (about 100m) where we came to a halt. It was a case of no entry past this point unless you had a permit. We swung around to go back up to the car park.

Here we got out and drank some of our water. It was about 104 degrees by this time. I took a few photos and walked part of the way down but didn’t go down to the water as I knew I would struggle to get back up again especially in this heat. 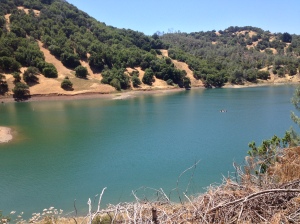 the water was very blue and looked so inviting

Changing maps we decided to stay on the road leading to the lake and drive west towards the coast. From this map it was quite clear that we would be going over the mountains and the road would be as steep and twisting as the road 2 days earlier. But the saving grace this time was that the road was wider and in better condition. Ok so it was wider for a fair few miles. then it gradually got narrower and the edges became broken. I was onto the door handle trying not to look scared. I couldn’t decide if it was best to stay in the middle of te road and risk hitting anything that came around the many sharp bends or stick to the out side of the road and risk slipping off the edge to hurtle down the steep slopes. I kept telling myself  ‘trust him trust him’. That was such a nerve wracking drive I was so relieved when finally we came to the junction with highway 1. Now we were going to follow the coast road down to Bodega Bay before turning inland again.

After the earlier it it was disappointing that when we reached the coast road there was a thick sea mist. The temperature halved. I kept hoping that once we got around the next bend the mist would disappear. We still had the roof down and it was getting mighty cold. There was an odd smell in the air, Owl attributed it to lavender however to me it smelt more like cat pee. We had been driving in and out of this sea mist for miles when we were so cold that we pulled up at the side of the road (even though there were the usual ‘no parking at any time’ signs. I couldn’t believe my eyes when I looked down at the water crashing below whilst I retrieved my hoody from the trunk/boot of the car.

miles of wood washed up on to the sand.

We continued our drive south still looking for somewhere to eat lunch. It was getting towards late afternoon by now but we didn’t want to just stop anywhere. We did see a few places where we could have stopped for a meal but these were all lapped by sea mist and we preferred to find somewhere that we could sit out in the sun.

We drove as far as Bodega Bay which Owl was excited about with it being the location for Alfred Hitchcock’s film ‘The Birds’. 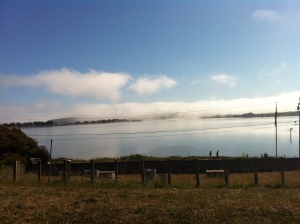 Turned around to head towards Santa Rosa. The road here was fairly quiet but most importantly reasonably flat. We passed farmland and small villages until we reached a larger town Sebastopol just west of Santa Rosa. We found a restaurant that looked quite interesting from the outside. 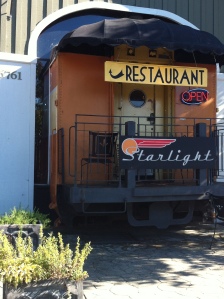 It isn’t often that you see the back end of a train embedded in the wall of a building. Once inside the building we found a whole carriage which had been turned into a restaurant. The Starlight. 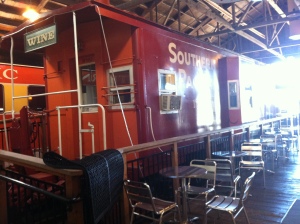 It was early evening so there were not many other people there. When we had finished our meal we sat outside in the sun for a while, not wanting to get caught up in the evening rush hour traffic.