After our adventures of the previous day we had a pretty quiet Saturday morning. Missy M had called the night before to tell us that the annual art and music festival would be in Novato and we should go. We visited our favourite diner Pepper’s for a late brunch of omelette for me and waffles for Owl. 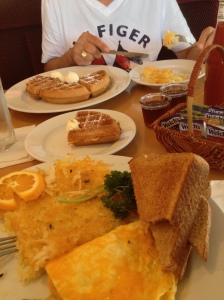 Wandered back to our room and waited for the call to go and meet Missy M.

By the time we arrived at the festival the temperature was a massive 100 degrees, which is not good for walking about. We were all melting, I am sure we all shrank a few inches during the afternoon. There were lots of interesting stalls to look at. Missy M bought herself a dress and some earrings.  We all found this stand very intriguing. 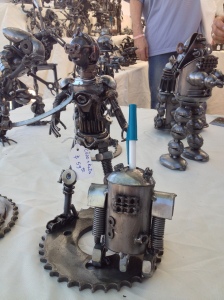 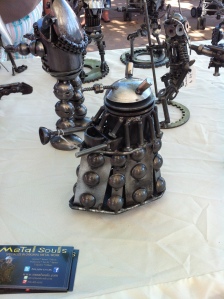 We walked from one end of the street to the other where we left Owl to listen to a live band playing while we went in search of ice cream from Missy M’s favourite ice cream store.  It was a blessed relief going into this air conditioned store full of every kind of sweet you could ever imagine and the sweet scent lingering in the atmosphere was hypnotic.  Missy M chose her tub of two kinds of ice cream and I had two kinds of sorbet which I felt would be more refreshing. Grabbing a bottle of water for Owl we headed back along the hot road to find my husband enjoying the music.

Cold desserts (rapidly melting) in our hands we meandered along back in the direction of the mustang. We had seen everything we could muster up the enthusiasm to see, it was just too hot to do much else. Even just walking at a slow pace felt like wading through treacle.

Once back at the car we decided it was time to collect Mr T which we duly did. I wouldn’t recommend travelling with father and daughter when the daughter knows her way around and the father doesn’t. Giving vague directions and not paying full attention to directions can lead to an interesting situation. With help from Mr T we finally found our way to a part of town we hadn’t seen before and a retail park that included several eateries.  We found ourselves at Pasta Pomoro one of Missy M’s favourites. Both teenagers chose a pasta dish whilst Owl and I both had a soft drink only as we were not hungry. It was nice to sit in partial shade just relaxing and chatting.

We were feeling tired and the teenagers had things to do so once the table had been cleared and left over pasta boxed up to take away we dropped them home and drove back to Petaluma and an early night. We were planning a busy day for Sunday.

Later we received a message that Missy M had left her makeup bag and car key in the mustang. She didn’t need them immediately but could we drop them off in the morning. Which of course we did even though Novato is in the opposite direction to Santa Rosa which was our chosen destination for that day. Whilst at the starlight the other evening we had picked up a free paper. Reading this we had discovered that Peggy Sue’s All American Cruise event was being held from Thursday to Sunday.

This morning the sky was looking a bit glum but we were confident that it would improve. Having completed our mercy mission we turned back north along Route 101 which didn’t actually take very long at all. Soon we were pulling into the designated car park. Already Owl was getting excited just seeing the cars parked around us, before we even got into the show itself.

There were mustangs, challengers, Bel airs, and corvettes every which way you looked. A slow walk through the car park to the field of cars, cars, cars and yet more cars. Owl was in his element. I won’t bore you with all the cars we saw, but here are a few.

this was what he meant. 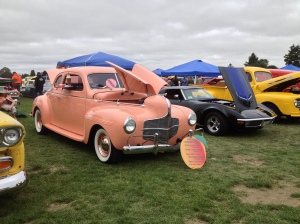 bet you haven’t seen many cars that colour.

The weather never did improve, we were so glad we had our hoodies from the previous weekend. We didn’t see all the cars on display but after a couple of hours we decided that we had seen enough and besides which our feet were aching. Time to go back to Petaluma and call into Peppers for a drink and a slice of home made mandarin cream pie to share mmmmm.