It was a long trip to London, considering that we are only 73 miles from our destination. First we had to head in the wrong direction to pick up Skater’s two mates Luke and Dom. By the time we were on our way we were only just ahead of the rush hour traffic. Because we were going in the opposite direction to most of the traffic we didn’t hit any hold ups until we reached Guildford, it was a slow crawl most of the way from there. I had decided (at Statto’s suggestion) to drive to Morden where we could then get the underground to Kings Cross which is just 5 minute walk from the church we were going to. Having left home at 4pm we reached Morden just on 7pm. By which time both Skater and I were desperate to find restrooms. Driving through busy traffic in the dark looking for somewhere to park proved to be beyond my ability.

Failing to find anywhere near to the station to park we ended up in South Wimbledon, one of the lads managed to find a car park on their phone gps. Following their directions I found myself attempting to drive along residential roads with vehicles parked on both sides making for slow progress especially when we came face to face or rather headlights to headlights at a stand off with oncoming vehicles. Who would give in and back up? I was driving our 4 x 4 Chevrolet Blazer but don’t have the confidence to back up in a straight line for 100m without hitting anything especially in the dark in unfamiliar surroundings. Both of us had stopped but just as I was throwing my vehicle into reverse we saw that our adversary was flashing his lights at us. Cautiously I crept forward until I found a gap in the parked cars on my left, sliding half into the gap there was just enough room for the other car to pass by. No sooner had I begun to tug the wheel to the right but another car appeared at the end of the road. This one obviously had no intention of waiting so I had no choice but to sit tight until the road ahead was clear for me to swing out and continue on my way.

It was probably another 5 minutes before we found the car park, only to discover that it was completely full. A sharp eyed lad in  the back noticed that someone was returning to their car so a quick circuit of the car park brought us back to the soon to be vacant space. By this time I was becoming desperate to relieve my bladder, from his comments I knew that Skater was just as desperate. Following gps we set off at fast walk (fast for me) towards the station and the certainty that we would find toilets at the station. Minutes before we reached the underground station we saw a petrol station on the other side of the road. Assuming that the petrol station shop would have public toilets, we crossed the road and trooped inside. Making a circuit of the shop it quickly became apparent that this might be a convenience store but there were no conveniences. Setting off again we soon saw the underground sign ahead of us.

At last we were there, pushing buttons on the closest ticket machine I attempted to purchase 4 tickets as speedily as I could standing there with my legs crossed hoping for relief once we were through the barriers and down the ceramic tile walled stairs. It was with dismay that we realised all that was at the end of the stairs were the two platforms, one for north bound and one south bound trains. we barely had a minute to wait for our train. Being only the second stop on the line the carriage was fairly empty so the four of us were able to find seats together. It is funny (or at least I thought so) that my three teenage companions who had chatted non stop for 3.5 hours, hardly uttered a word between them for the entire 40 minutes we were rattling along below the streets of London. The closer we got to the City the more crowded the carriage became and it was noticeable that the casual dress of earlier travellers was changing to more formal workwear.

Finally we exited our carriage at Kings Cross and made our way as rapidly as we could up the numerous stairs and escalators to find our way out onto the street. Still we had not found any public conveniences. Trying to work out which direction we needed to follow we spotted a MacDonalds restaurant on a nearby street corner. A  consultation resulted in agreement that a quick pee break followed by a burger was in order. As we stood on the corner of the street waiting to get to the other side and relief it felt like an eternity before the traffic stopped to let us cross. As soon as we had crossed the road the three lads disappeared up the stairs to the gents. I followed as quickly as I could up the stairs to the ladies.  Once there the flood gates opened, I was beginning to think they were not going to stop.

Back downstairs I bought chicken burgers for myself and Skater, the other two lads were already eating their food. I text Statto to let him know we were in the area, he replied that the first act had already finished and Prodigal would soon be on stage. Chivvying the lads out of the door we strode off (they strode, I trotted) as fast as my little legs would move along the west side of St Pancras International station towards the Old Church where New Desert Blues would be performing. I have never seen such an endless queue of waiting taxis. Finally we made our way up a set of steps to the church entrance. Luckily it was still the interval, I was greeted by Statto, I managed to find a chair and sat at the side of the crowd leaving Skater and friends chatting with Statto.

I didn’t have long to compose myself before my son and his fellow band members were on stage. I really enjoyed the show that the put on for us. I felt that the use of this old church was an inspired venue. I loved the shadows on the walls and ceiling thrown up by the different coloured lights used for each song performed. Here are a few examples. 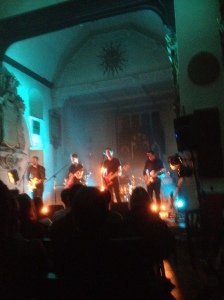 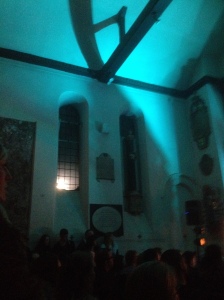 As much as I was enjoying the performance I was still keeping a watch on the time. When we had left the car one of the lads had noticed a sign stating that the Car Park closes at 11pm, this meant that we had to be on our way back by 10pm. I was relieved therefore when the performance ended at 9.45pm but before we could leave there were a number of people I had to speak to. Fellow parents and others I had not seen for years. The last person I managed to speak to was Prodigal (I had already seen his girlfriend and her father). Then began the fast trot back to the station.  We found a quicker route this time and were satisfied with our progress until reaching the ticket barrier where only three of us made it through unimpeded. Panic set in, none of us had any cash on us to buy another ticket and the one Luke had just wasn’t working. He ran to speak to a LT worker who pointed him in the direction of another worker speaking to a woman at the barrier. Luke patiently waited his turn but the woman and the worker walked away from the barrier to a bank of ticket machines. Eventually Luke was let through the barrier and we made our way into the bowels of the station.

A few minutes later we were on the packed train and there was nothing we could do but sit patiently until we reached our station. It was 11pm when we left the station and we still had a 10 minute hike back to the car. There was nothing I could do but walk as quickly as my legs would carry me as tired as I was by then. If I had been religious I would have been praying that the car park would be open. I could almost have let out a whoop whoop when I found that my car was not stuck in a locked car park. I had not been driving for long when I realised that all three lads were asleep.

Of course the drive home was much quicker and easier than the drive there had been. I had got the boys back to their homes and arrived back at our home by 1.05am. The whole trip had taken 9 hours but it had been worth it.